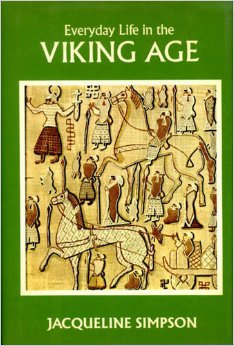 This book on the life of the Viking Age stands out from many of this type in that the author throughout has used first-hand sources and the most recent scholarly authorities, many of them inaccessible to the reader without a knowledge of the Scandinavian languages. She has drawn widely on recent archaeological work in the Scandinavian countries, and her chapters on Ships and Seafaring and The Merchants  in particular have benefited greatly from this, and give a vivid and accurate picture of our present state of knowledge. She has also the advantage of a detailed knowledge of Old Icelandic, and her quotations from sagas and poems are her own translations, reliable and aptly phrased, as one would expect from a reading of her previous work, The Northmen Talk. Miss Simpson has cast her net widely, and there is a surprising amount of material here, ranging from agriculture and food to sports and pastimes, and from costume to the worship of the gods. She has also made good use of a most important source of information which Norse scholars have been rather slow to appreciate: the accounts of life among the Rus on the Volga and in the trading towns of Scandinavia by Arab writers, many of them recorded in the tenth century when the Norsemen were still heathen. A useful collection of Danish translations was published in 1954 by Harris Birkeland and Miss Simpson has made good use of this.

This leads to one criticism of the book, or, since this is clearly no fault of the author, a regret that the publishers have not allowed her to add detailed references at the end. There is a feeling that in books of this kind footnotes are undesirable, but surely it would have been worth the publisher’s while to allow a few extra pages at the end, so that we could be given a full bibliography instead of only ‘Suggestions for Further Reading’. I cannot think that the unscholarly reader would be unduly frightened by this, while the value of the book to scholars would be immeasurably increased (and, surely, the sales accordingly). As it is, many readers will find it frustrating to be unable to follow up some of the important and unusual information given here, much of it in Scandinavian publications not easy to find. Otherwise the presentation is excellent; the plates are well-chosen, and many of them unfamiliar in English publications, and the drawings pleasing and accurate, covering a very wide range. Miss Simpson is to be congratulated on a survey of life in the Viking Age which is both competent and stimulating, a combination all too rare in popular illustrated books on early times.