The bull loses his ancient importance in later heathen times in the north, and is replaced by the horse. The same seems to be true of Celtic paganism where the bull, obviously a divine symbol of great power in the early period, plays a relatively small part in the vernacular literature (Ross, pp. 302 ff.). In the Roman period manu heads of bulls from metal bowls and cauldrons survive from Denmark, and the Gundestrup bowl has two scenes where a bull is being attacked by dogs, while a man prepares to kill the animal with a sword. How far such a scene may be influenced by Mithraic ritual it is hard to say, but certainly the scene bears little resemblance to the conventional one where the bull is stabbed by the god, as depicted on Roman carvings and wall-paintings. It is possible, as Ross suggests, that the picture is that of a hunt. 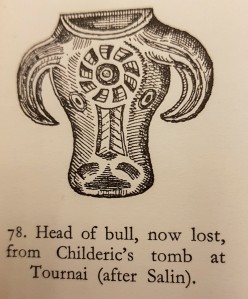 In Germanic tradition, small bulls’ heads appear on the metal standard from Sutton Hoo, and one survival of special interest is the metal head of a bull, now unfortunately lost, from the tomb of Childeric I at Tournai, which bore the solar disk on its forehead (Fig. 78). This may explain the hole in the forehead of a small bull’s head from the Roman period in the National Museum of Denmark, from which some ornament seems to have been lost. In the Migration Period, however, the stallion appears to have replaced the bull in Scandinavia as the chief sacrificial animal, and to have represented the male principle of fecundity, linked with both the fertility gods and the deity of the sky.

The horned helmet bearing the smooth horns of the bull, following the pattern of the helmets from Vixø (Denmark) in the Bronze Age, can be seen in the Roman period on the Gundestrup bowl, in association with the wheel, and again on the runic horn from Gallehus. In the Vendel period the tradition changes, and the horns on the helmet are curved round to end in birds’ beaks, so that the resemblance is to an eagle rather to a bull. The eagle at this time had become a popular symbol in the Germanic world, linked with the cult of the god of battle (Davidson, 1965a, p. 23). It is interesting to find a marked link between bull and bird in Celtic iconography also (Ross, pp. 289-90). The rounded tops on the horns of bulls in the Roman and Migration periods, as on the Vixø  helmets in the Bronze Age, have been interpreted as symbols of power and fertility (Oxenstierna, pp. 37-41), and it seems possible that they were vestigial symbols of the sun-disk.

Horned cattle were sacrificed in the ship-graves of Scandinavia, together with horses, and the head of an ox or bull found on the great bed in the Oseberg ship. We know too that cattle were killed at the sacrificial feasts. The literary sources preserve a memory of the sacrifice of a bull to the god Freyr: this was done by a devoted worshipper in Víga-Glúms saga, and the god was pleased by the offering. A bull also seems to have been the traditional sacrifice made by the winner of the ceremonial duel, the hólmganga, according to the Icelandic sagas. 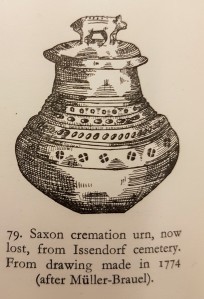 The boar continued to be an important symbol in pagan religion up to the Viking Age. it was a cult animal among the Celtic peoples, shown on many early coins and stones, and also modelled as a freestanding figure (Ross, pp. 308 ff.). It has left a deep impression on Irish and Welsh literature, where tales of boars of supernatural strength abound, and the hunting of this animal seems to have special significance. The Germanic peoples associated the boar with the dead, for we find a small boar on the lid of a cremation urn from Issendorf in Germany (Fig. 79), while it was used as a helmet crest by Celts and Germans alike. A warrior on the Gundestrup bowl has a boar on his helmet, while helmet plates from Vendel and moulds used for making such plates from Öland show warriors with similar boar crests. Such a helmet survives from Anglo-Saxon England, recovered from a seventh-century burial mound, Benty Grange in Derbyshire, for this is surmounted by a crest in the form of a small bronze boar with gilded plates and nails on his body, and ruby eyes. Descriptions of boar-helmets are found in Beowulf, where they are said to protect the warriors who wore them in battle. Small figures of boars were also stamped on a sword-blade, probably of seventh-century date, recovered from the River Lark in Norfolk (Davidson, 1962, p. 49).

In Norse literature, boar-helmets are said to have been among the most cherished possessions of the early Swedish kings, and received names such as War-Swine and Battle-Boar. The boar had some association with Odin, since it was on its flesh that the warriors feasted each night in Valhalla. Its main connection, however, was with the Vanir, and Freyr owned the boar Gullinbursti, the Gold-bristles. He was associated with the sky, for it was said by Snorri that the light streaming from his mane illuminated both sea and land, and that he could run faster than any horse, and could be seen on the darkest night. This description is interesting in view of the boar from Benty Grange, which had tiny gilded nails to represent shining bristles. The boar belonged also to Freyja, and in the poem Hyndluljóð she disguised one of her worshippers as a boar so that he might visit the giants and learn his ancestry. It is possible that the early boar helmets may be regarded as boar-masks, worn by worshippers of the Vanir in order to identify themselves with their god and goddess and obtain blessing and protection, and used also in divination ceremonies. The royal family of the Swedes claimed descent from the god Freyr, so that such helmets naturally ranked as royal treasures.

Memories of bar sacrifice survive in the literature, and there are references to sonargǫltr, the sacrificial boar. The fullest details occur in a late saga, Hervarar Saga, where it is said that the largest boar obtainable was sacrificed on the eve of Yule, and that men took solemn vows as they laid their hands on his mane. In Heimskringla this sacrifice is represented as a divination ceremony, when the god revealed hidden knowledge to men.

Pork remains the traditional Christmas dish in Sweden, and the boar’s head is still popular in Jutland. In Scania one traditional Christmas dish was a salted pig’s head with trotters tail, laid out on a flat loaf. This had to be left untouched until the first spring ploughing, when it was eaten by men, and given to the horses as well (Nilsson, 1938, pp. 44-45). Traces of ritual associated with the boar’s head long survived in the Christmas ceremony at Queen’s College, Oxford, where the head was brought in a silver basin with orange, rosemary, bay and holly, and a carol of the early sixteenth century sung in its honour and again at Merton College where it was customary to serve a model of the head in cold meats (Hole, 1950, p. 20). Aubrey mentions the popularity of the boar’s head with a lemon in its mouth in houses in England before the Civil War. at Hornchurch in Essex a boar’s head used to be supplied by the lessees of the tithes, which belonged to New College, Oxford, and this was carried in procession to a field beside the churchyard, wrestled for, and then eaten in the public house (Hone, ii, 1650). Where such scattered pieces of evidence survive, the killing of the boar seems to be connected with the midwinter feast.

Some of the figures on gold bracteates of the Migration period have been identified as goats, but it is difficult to make a clear distinction between goats and horned horses or stags. The main importance of the goat in the literary sources is its association with Thor, who is said to have driven a wagon to which two goats were harnessed. The names given to these, Teeth-gnasher and Teeth-grinder, imply association with the storm which shatters rocks, the sign of Thor’s approach through the heavens. The tradition of the goats was known in Scandinavia as early as the ninth century, since they are mentioned in the poem Haustlöng, where the terrible aspect of Thor and his chariot crashing through the heavens is emphasized. The most impressive myth about the goats is one preserved in Snorri’s Prose Edda, in which Thor kills and eats them for dinner, then collects their bones on the skins and by raising his hammer over them restores the animals to life. It mat be noted that the connection of goats with the thunder-god is found consistently over a large part of Europe, and that the goat is connected with Indra, Zeus and Jupiter.

The she-goat Heiðrún is said in Grímnismál to stand, like the stag, upon the hall of Odin, and from her the banqueters obtain the mead which is served in Valhalla, while she feeds on the branches of the World Tree. it has been suggested that all the various horned animals from which precious liquids are obtained–the hart, the cow and this she-goat–are in reality early goddesses in animal form. They may, however, be based on the conception of the milk-giving tree, found very early in Mesopotamia, since hart and goat are said to feed from Yggdrasil.

The figure of a goat remained a dominant one at the old Yuletide festivities in Norway and Sweden (Nilsson, 1938, pp. 51 ff.). This animal, like some of the English hobby-horses, was formed by two men covered with a skin, while a third man rode on its back. The goat had an artificial head and moving jaws, and he was very popular in Denmark; various ecclesiastical prohibitions against him were made from the sixteenth century onwards. Sometimes a she-goat also took part in the revels. Loki’s exhibition with a goat, in order to make Skadi laugh, when, according to Snorri, he tied the goat’s beard to his own genitals, might well be derived from the crude humour of such games. Like certain episodes included in the mumming plays, it would be wholly in place in an early fertility ceremony.