It is now possible to attempt an answer to the question asked at the beginning of the second section of this book. The main symbols of the Bronze Age seen in the rock-carvings did not disappear from the north, for long after the close of the Bronze Age evidence for them may still be found, although this is reshaped and rearranged by new influences and cults coming into Scandinavia from outside. Even after the end of the heathen period a number of these symbols remained powerful, leaving an enduring mark on folk customs in north-western Europe.

The symbols of the sun-disk, the axe, the spear and the sword were still of primary importance in the culture of the late heathen period up to the Viking Age. The ship, the horse, the boar and the wagon were also religious symbols of continuing significance, closely linked with the cults of the heathen gods until the coming of Christianity. The tree and the serpent maintained their meaning as religious symbols, and there are traces of continued interest in the animal symbols of bull, goat, stag and bird, while the rituals of the sacred marriage and of the divine brothers have left traces in both archaeological and literary sources.

It remains now to consider the various deities and cults with which these symbols were associated in the Viking Age. The majority of them appear to be linked with the Vanir, the gods and goddesses of fertility. The ship, horse and boar were their accepted symbols, and there is some link between them and the sword, the wagon and the sacred marriage. The difficulty here is that there were many local deities included in the general tradition of the Vanir, with roughly similar cults and ways of worship. We hear of Freyr and Freyja in Sweden, but also of many other names: Ing, Ull, Scyld, Gerd, Skadi and Heimdall have all been mentioned in the course of this study. The Swedish god Freyr had certainly connections with the sun, since he was held to grant good seasons and fruitfulness of the earth, which depend on the sun for fulfilment. Other figures such as Ing and Ull have certain features which might link them to the sky and the sun, although we know little that is definite about their cults. These Vanir gods are also connected with the sea, the dead within the earth, the harvest of fields and rivers, increase among the herds and the birth of healthy, lucky children.

Another set of symbols in the heathen period is connected with the cults of Odin and Thor. the whirling disks of the Migration period seem to be linked with Odin, and also the pairs of dancing youths. The swastika, however, which replaced the disk and must presumably be linked with the turning sun and the kindling of fire, was associated with Thor in the late heathen period, and the axe, partially replaced by the hammer, was his weapon, symbolizing thunder. His too was the wagon which crossed the sky, bringing the storms with it. There is some reason to believe that Wodan/Odin, the Germanic god of magic and the dead, took over some of the powers of the earlier Tiwaz, the god of the sky who also presided over battle. The spear was probably first associated with Tiwaz, and the disk as well. When we find the large spear-bearer standing out from among the smaller figures (p. 35 above), this may be an early representation of Tiwaz himself. We know that there was also a Germanic thunder-god, associated with the axe and the oak tree, worshipped in forest clearings in tree shrines, who developed in the north under the names of Donar and Thunor and in Scandinavia as Thor, the most popular god of the later heathen period. He may have been represented in the Bronze Age by the huge figure holding an axe, or this may have been another representation of the one supreme sky-deity. It may be noted in any case that the idea of twin figures connected with the sky, either sons of the sky-god, or a pair of deities ruling the sky,was firmly established by the end of the Bronze Age. in Roman times three gods, Tiwaz, Donar and Wodan, were recognized by the Romans and equated with Mars, Jupiter and Mercury, and these were worshipped by the Anglo-Saxons as Tiw, Thunor and Woden. 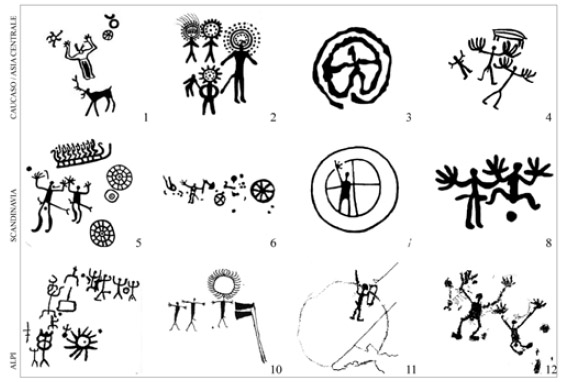 Apart from the rock-carvings, small metal figurines from the late Bronze Age represent two recognizable deities in human form: the helmeted god with an axe (apparently in twin form), and a goddess with necklace and plaited hair. These and other divine powers may have been worshipped also in animal form, or symbolized by footprints, raised hands, ships or wagons. How many separate deities were recognized at this period is very difficult to say in our present state of knowledge. In many early religions the sky god is responsible also for victory in battle, and for granting fertile land and good seasons. Once various aspects of his power came to be emphasized a kind of splinter movement took place, and new gods with more specialized and limited powers emerged. There seems to have been one supreme goddess throughout the pagan period, but she also had different aspects, and some of these appear under various names; there are also groups of three or more goddesses, not clearly differentiated, in the later literary sources.

In the Bronze Age the moving disk of the sun seems to have been an object of worship in a way no longer evident later on, when the interest had shifted to the powers ruling the course of war, the heavens and the fertility of earth and sea. In neither period, however, must we be too ready to see anthropological deities, for the supreme power of a symbol was that it could give satisfying expression to the sense of the numinous, and be directly identified with supernatural power. The Vanir in particular may have been visualized and worshipped in the form of horse, boar and ship rather than as clearly defined human figures. The tendency to give the gods human attributes, and to fit them neatly into families in a divine kingdom, was largely due to the ingenuity and organizing tendency of sophisticated poets and antiquarians. Even in the Viking Age there was no clear-cut distinction between the powers of Odin, Thor and Freyr, for these overlapped widely in the realms of battle, fertility, the heavens and the kingdom of death. 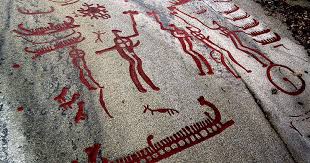 The surprising characteristic of the rock-carvings is the uniformity of their symbols in so many different regions of Scandinavia. It is surprising also to discover that so many of these symbols obstinately live on in folk customs long after the heathen religion has passed away. They continue to be connected with the four focal points of the solar year, midsummer, midwinter, spring and autumn. Their purpose is to maintain the existing order of the seasons for farmers and herdsmen and fishermen, to ward off cold and untimely storms and pestilence among herds and men, to promote fruitful crops and healthy animals, and to bring shoals of fish into coastal waters. Such in early days must have been the province of sky-god and earth-goddess.

The symbols are found far outside Scandinavia, in the Mediterranean regions, the Near East, the Steppes, and among the nomadic peoples of northern Europe and Asia. Many of them were retained among the Celtic peoples in their art and literature. It is thus difficult to be sure how far individual symbols have been reintroduced into Scandinavia after the end of the Bronze Age. Various solar cults in the Roman provinces may have caused the ancient symbols of disk and ship to take on fresh vigour, and may account for their appearance with birds and horses in the Migration period. Again in the Viking Age there is some indication of new ideas coming into Gotland and Sweden from the south-east, along the trade routes which followed the Russian rivers to Byzantium and the Near East. Strong shamanistic elements in the cult of Odin in the ninth and tenth centuries, his representation as a rider on an eight-legged steed, and the emphasis on the World Tree and the Final Battle, as well as a renewed tendency towards human sacrifice, may be due to influences from outside Christian Europe.

While new influences entering the north gave the mythology of the late heathen period a new strength and richness, it must also be recognized that certain symbols possessed great resilience. New conceptions were welcomed, it would seem, because they could easily be identified with the old familiar ones, and fall into recognizable patterns. The significant point emerging from this study is that already in the Bronze Age these basic symbols had been brought together, and vividly expressed in pictures and ornament, apparently based on regular seasonal ceremonies. If the men of the Viking Age, accustomed to worship their gods at Leire or Uppsala or Thrandheim, had been transferred back to these Bronze Age rituals, such processions, feasts, dramatic rites and mimes as went on there would probably have seemed neither alien nor remote to them. It is true that the adoration of the sun was no longer dominant in the symbolism of later times, while from the Migration period there is an element of terror in the religious symbolism conspicuously lacking in the rock-carvings; there are no monsters and dragons in the Bronze Age, so far as we can judge. But allowing for some shift of emphasis, the aspect of religion with which the rock-carvings are concerned is something which changed little throughout the whole heathen period.

Two major points of no return can be discerned in the religious history of Scandinavia. One was at the end of the hunting period, when agriculture reached the north and the cults of settled villages and farming and fighting communities developed. The second was the acceptance of Christianity. The period between, for all its variations in cults and symbols and the gods and goddesses of different names found in the literature, may be viewed as a largely harmonious whole. The religion of this epoch was that of men working on the land and travelling by the seas, fighting in small bands under independent kings and heroes in a heroic society. There seems to have been no strong central organization of their religious life, and in the public ceremonies which were the expression of their philosophy of life all classes of society, kings and farmers, seafarers and fighting men, took part. We are fortunate that so vigorous and enduring a picture of these religious rites in the Bronze Age has been left on the rocks of the Scandinavian north.